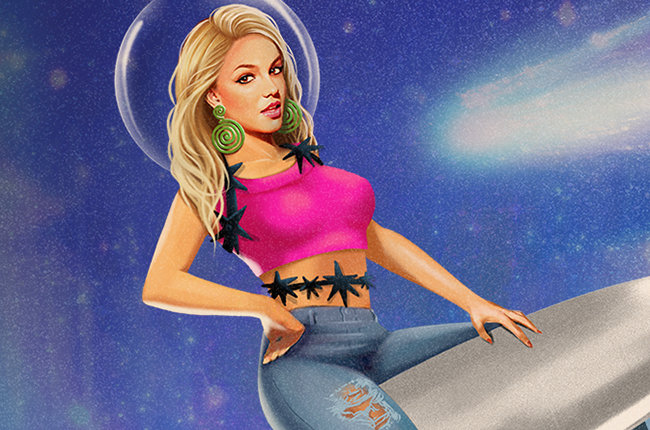 “Pretty Girls” has been born into what may prove to be an ideal climate. This is not merely in reference to Britney Spears’ apparent appeal for a summer hit; although the presence of Iggy Azalea and a sticky, “Fancy”-mimicking beat are perhaps enough to account for whatever vitriol may be levelled by detractors of the single, the first to be lifted from Spear’s upcoming album.

Instead, one may take interest in the fact that Spears’ return coincides with A.G. Cook’s ambitions to proliferate both the sound and philosophy of his London-based label PC Music. This month sees the UK releases of what could be viewed as two integral pillars in Cook’s musical colosseum: PC Music Vol. 1, the label’s first official compilation, and the single “Hey QT”, an electro-europop earworm that works as both a parody and celebration of the often shallow nature of mainstream music.

Cook and his collaborators and protégées are receiving praise for applying a thick gloss of irony to pop music’s inherent immediacy. At the core of “Hey QT” is an infectious Aqua-esque melody, one that could have easily been tamed into a legitimate, chart-ready anthem. But the focus is instead on the individual cogs that keep the engine of an effective tune chugging along. As a result, “Hey QT” boasts few layers; the drizzles of crisp synth evaporate on impact, while the decidedly artificial treatment of QT’s (AKA Quinn Thomas, as portrayed by performance artist Hayden Dunham) vocal is a clear nod to artists of Spears’ questionably talented ilk.

These are hallmarks of PC Music’s output, however, and the QT project is certainly witty in its promotion of the titular star as both a pop music siren and a refreshing energy elixir – two essential ingredients for a transcendent dancefloor experience. But it is also rather galling that Spears’ “Pretty Girls” seems destined to be criticised for being built on the same foundations that “Hey QT” coldly sifts through to rapturous applause.

“Pretty Girls” mocks the male gaze (“Is it true all these men are from Mars? / Is that why they be acting bizarre?”) and salutes female vanity in the vaguest possible terms; lyrically, at least, the track never backs its headliners into a corner of self-objectification, and this novel air of innocence is somewhat striking.

But with such an unnerving distinction between Spears’ digital detachment and Azalea’s comparable lucidity, their collaboration is almost a parody in itself. As the designated driver tasked with bringing Spears’ drunken cyber-chipmunk home safely, Azalea emerges as the track’s MVP by default. Her brief but confident verse even harks back to Spears’ own heyday with a tip of the hat to “… Baby One More Time”. While the reference does serve to commemorate the singer’s seventeen-year long career, it also highlights her regression as an imposing presence on her own work; with every yelp of “We’re just so prett-EH!”, Spears’ once inimitably nasal purr is stretched and smooshed into the mix in order to emulate the brassy Brit snarl of Azalea’s “Fancy” co-conspirator Charli XCX.

While one can appreciate the respective merits of “Hey QT” and “Pretty Girls”, we feel compelled to honour the track most purposefully built to entertain. In addition to possessing a smattering of hooks and beefy production from The Invisible Men, the components of Spears’ new single can be delineated and fitted around PC Music’s pseudo-cynical agenda. Like a soup kitchen adjacent to a Warhol exhibit, “Pretty Girls” feeds both the very human needs to observe and participate. RG