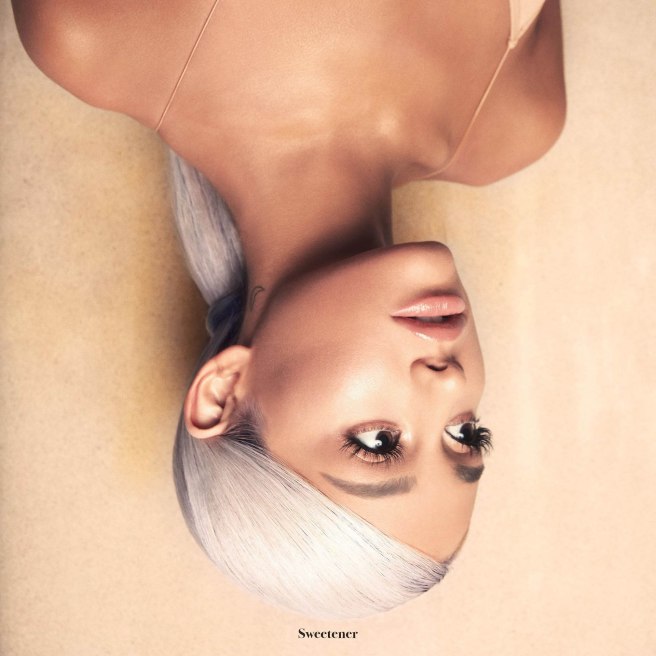 Sweetener is Ariana Grande’s fourth album, and it’s a bit soured by its over-reliance on Pharrell William’s dry, faux-funk beats. Considering the two hits pulled from the LP – ‘No Tears Left to Cry’ and ‘God is a Woman’ – are both Max Martin cuts, surely the writing was on that wall that something wasn’t quite working?

If Williams’ productions win critical acclaim, it will be from journalists on a tight schedule. His songs are interesting enough for a minute, but Pharrell soon depletes his sachet of tricks. Not that you’d notice if you’re prone to the skip button and have a glut of albums to review by midnight.

Fortunately, I have time on my hands.

The Nicki Minaj-assisted promo single ‘The Light is Coming’ is admirably mental island-tinged pop, full of white-hot percussion and digital grind – until you realise the irate male vocal sample has been looped without any plan or artistic intention. It’s as if Pharrell built a skeletal first draft in the studio, popped out for a coffee, and never came back.

Ariana keeps her end of the bargain on ‘Successful’, toasting to herself and womankind with slinky cool, but her effort is somewhat undone by cheesy groaning keyboards. ‘Borderline’ harkens back to The Neptunes’ early-00s album fillers, and I now understand Kelis’ decision to cease working with them exclusively in 2003.

To Pharrell’s credit, the Piña Colada-flavoured ‘Blazed’ and the dreamy goodness of ‘R.E.M’ are fully realised successes, and prove Ariana’s collaborative instincts weren’t too off-the-mark.

Electro slowies like ‘Better Off’ and ‘Goodnight and Go’ offer pleasing restraint, but the first single ‘No Tears’ still towers over the album. Max Martin has crafted a daring piece of theatrical dance-pop here, as laden with UK garage as it is with heavenly wails.

This is Ariana’s first project since the terrorist attack at her concert at Manchester Arena last May tragically claimed 23 victims. In choosing the first single, Ariana and her team had to strike a delicate balance – uplifting but not glib, respectful but not in mourning. And they’ve passed with flying colours. It’s just a shame the rest of Sweetener doesn’t always hit the same sweet spot.