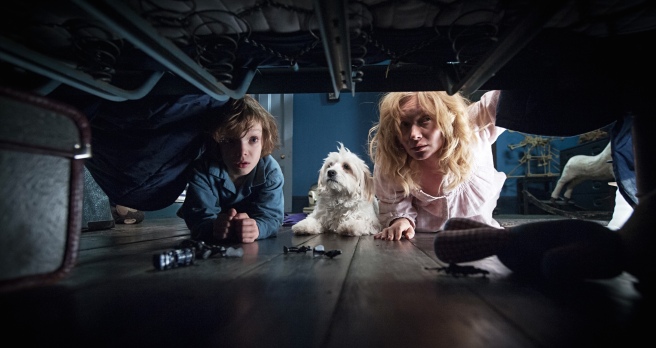 Review: In a horror-drama crammed with unsettling moments, The Babadook’s most nimbly wielded weapon is the fleeting but resonant savageness with which it depicts a mother struggling to love their child. It’s a concept that director Jennifer Kent arguably employs to emulsify the two genres her feature film debut works within; part kitchen sink character study, part haunted house freak show. The film’s first half is understandably earnest and dialogue-driven as Kent takes care to convey the everyday exasperation of single mother Amelia (played by the extraordinary Essie Davis), who lives an anxious life in the Australian suburbs and while in mourning for her husband seven years after a bid to rush her and their unborn child to the maternity ward resulted in a fatal car crash.

A superstitious eccentric with a skill for crafting Home Alone-style artillery, her son Samuel (Noah Wiseman) is a sweet but stubbornly errant loner who can rarely go a night without crawling into his mother’s bed. Deprived of sleep – with Kent fast-forwarding through the few hours she does indulge in to exacerbate the interminable nature of her day-to-day – Amelia insists on not only looking after her son’s needs, but also those of her elderly neighbour (Barbara West) and the geriatrics she tends to at a nursing home each day. Both her and Samuel look forward to reading a children’s story at the end of a long day, that is until the sudden appearance of a grisly but beautifully crafted pop-up book entitled Mister Babadook captures the darkest recesses of Samuel’s imagination.

Sketched in charcoal, the book’s eponymous character is a behatted sycophant with sharp, spindly fingers and a manic expression; his murderous behaviour relayed in playground-friendly couplets: “Take heed of what you’ve read… / Once you see what’s underneath / You’re going to wish you were dead”). As Samuel’s palpably felt obsession with the monster grows, Amelia’s professional and personal relationships begin to crumble, and it is the ensuing mental and physical self-isolation that becomes the cue for Kent to flex her flair for evoking moods of near-suffocating dread. There is an admittedly awkward shift from dramatic realism to conventional horror tropes as the impact of illogical reactions take effect, but this is small price to pay for the thought-provoking thrills stashed away in the film’s latter half.

Refusing to settle for cheap jump scares in order to rile up its audience, The Babadook is at its best when suggesting the monster’s existence in surprisingly rational ways. Think you’re safe at a police station in the day time? Kent implores you to think again. The exquisitely dull colours of Amelia’s home, bristling sound design (the scrape of the book’s pop-up appendages against paper, the creaky-floorboard growl of the Babadook itself), and a singular but magnificently unexpected burst of gore will have your skin practically ushering the film underneath it.

With the tumultuous relationship between Amelia and Samuel realised in affecting detail, The Babadook is a uniquely cerebral horror and a promising calling-card for Kent. Even if her obvious talents remain just a tad raw, as her film’s ending suggests, there is truly nothing a little nurturing cannot fix.