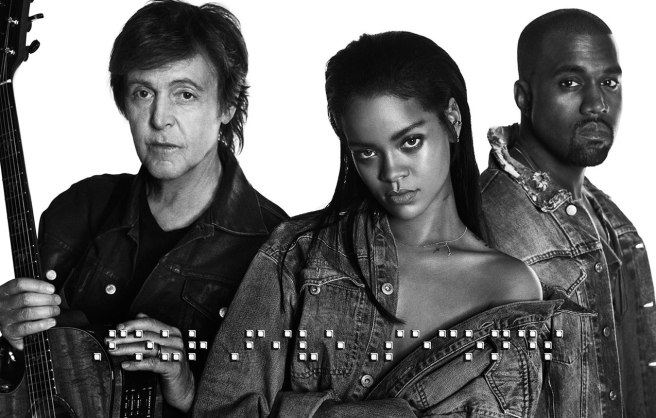 While it’s obvious that an icon such as Paul McCartney will never be irrelevant, one would think a musician of his calibre would rather participate in the Identity Parade round of Never Mind the Buzzcocks than to have their name attached to a track as hollow and unimaginative as “Four Five Seconds”. In addition to McCartney’s acoustic strumming, the lead single from Rihanna’s as-yet untitled eighth album, which is available to listen to here, features a limp blast of organ and vocals from Kanye West, but sports none of the poignancy of “Only One”, West and McCartney’s previous – and ostensibly similar – collaboration.

Rihanna is a talented vocalist who has wrangled empathy from listeners in the past (“Russian Roulette”, “Cold Case Love”, “Stay”), but “Four Five Seconds” shoots for a salty, world-weary kind of exasperation, and struggles to draw pathos from Rihanna’s persona in the same way “Only One” could from West’s. The lucrative exposure that his marriage to Kim Kardashian has provided means his transition from startlingly talented whack-job to sensitive family man is public property, and this notion cannot help but feed into and influence a listener’s experience of the track.

It also helps that “Only One” – in which West acts as a conduit for his late mother’s wisdom – is beautifully written. “You’re not perfect but you’re not your mistakes” is a sublime lyric by its own merits, but those of “Four Five Seconds” (“I think I’ve had enough / I might get a little drunk / I say what’s on my mind,” Rihanna sings, conveying sentiments that have dotted her discography previously, just in a less catchy way) further reinforce its emotional resonance.

Although both tracks use minimal instrumentation, “Only One” acknowledges the signature sound of each headliner by pairing McCartney’s soft keyboards with an auto-tuned voice reminiscent of West’s 808s & Heartbreak days, which makes his switch to such a pared-down aesthetic a little bit easier to swallow. As one of the pop world’s greatest chameleons, Rihanna’s venture into country-lite isn’t entirely unrewarding – after some unpleasant hoarseness, there’s a nice enough belt at around the two minute mark – but after a two-year wait for new material, both her and her fans deserved a bigger and better comeback.

Perhaps she could consider getting by without a little help from her friends. RG