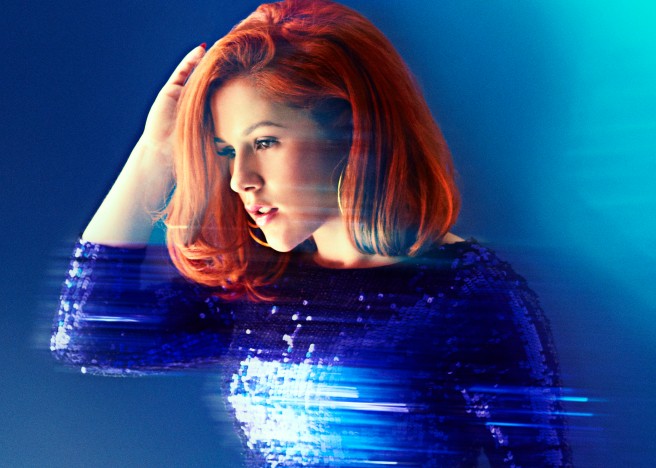 Available to buy from iTunes.

Review: “I just can’t blend in…” Katy B laments as Little Red begins to wind down; a dangerous statement to make considering even her biggest fans would struggle to label the chirpy Brixtonian as an extrovert. One of the most refreshing things about her 2011 debut On a Mission was how she reclaimed partying for the people, breaking down the myriad emotions of a night out over racy house beats in a way that only a quasi-wallflower could. In an interview with The Quietus back in February, Katy explained the fate of “Hot Like Fire” – a sexy, raucous blast of attitude that positions the usually modest singer in a whole new light. But her account rather ironically paints her as disappointingly passive; apparently Geeneus, her producer and co-manager, was “unhappy with his bassline. Or something.” And so a potential game-changer festers on the deluxe edition.

Katy’s loyalty to the Rinse FM honcho is understandable; his continued guidance has yielded a cleaner, more well-oiled machine than her debut. Singles “5 AM” and “Crying for No Reason” showcase the album’s duality of dancefloor-ready bangers and gusty, synth-laden balladry. Katy once again thrives on tracks driven by intimate, often internalised scenarios. Jessie Ware joins her in confronting a DJ boyfriend’s temptress on “Aaliyah”, “5 AM” examines a post-party panic attack, while the clattering anxiety of “All My Lovin’” retraces those final steps towards an all-consuming desire.

The success of “Crying…” has most likely led to a mellower record than originally planned, but in a manner appropriate for a record once plagued by pushbacks and an aborted lead single, Little Red rewards perseverance. Both the greasy, hi-hat-heavy slog of “I Like You” and the aimless clipped beats of “Sapphire Blue” explode in their final stretches. In the latter, Katy takes a potentially banal breakdown (“No more walls / No more doors / No more windows / No more floors”) and sells it with a passion unheard of from her contemporaries. Whatever she may lack in showmanship, Katy more than makes for in her ability to transform what once bordered on filler material into an album highlight. Little Red deserves to be massive.