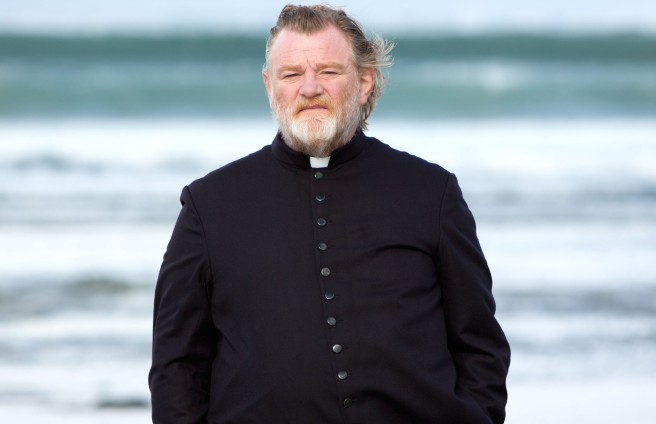 Review: It’s rather galling just how inevitable the subject of child abuse has become when discussing priests, with accounts of unspeakable brutality echoing through the minds of a generation at the mere mention of the catholic church. In a move indicative of his film’s often stifling self-awareness, director John Michael McDonagh practically herds the expected elephant into the room with a parade in Calvary’s opening scene, when community cornerstone Father James Lavelle (Brendan Gleeson) hears out one man’s childhood trauma during an anonymous confession. With the perverted priest responsible for these acts now dead, his unseen victim vows to kill Father James in a week. Bemused, and with this rendezvous on the periphery of his mind, Father James keeps himself busy aiding the roster of eccentrics that populate his rural Irish town.

The plot holds promise, but Calvary craves a crackling energy in place of the dead air that haunts too many of its scenes. Some of these just about coast by on the charisma of established Irish actors turning in reductive variations of their established schtick, from Pat Shortt’s salty everyman routine to Aiden Gillen’s inky misanthropy. Other supporting players either lack conviction (such as a curiously flat Chris O’Dowd) or are ill-served by portentous characterisation (Dylan Moran’s oily banker seems tailor-made to give viewers left embittered by the recession an excuse to hurl their drinks at the screen.) McDonagh’s script holds some cute observations – most of which pertain to Father James’s interactions with either his dog, or M. Emmet Walsh’s crusty writer – but is largely comprised of turgid pseudo-philosophical babble that goes nowhere. Father James’s visiting daughter (Kelly Reilly), meanwhile, exists only so he can contradict her cynicism with cloying wisdom.

Just as his character is a guiding light to a town full of misfits, Gleeson remains the film’s one true saving grace. Earthy and affable, he navigates the film’s episodic structure and tonal inconsistencies with a strong screen presence. The universal praise he’s been receiving for his performance will ensure vehicles more proportional to his talent are a distinct possibility, but for the almost thankless task of carrying Calvary, he will forever be in our prayers.