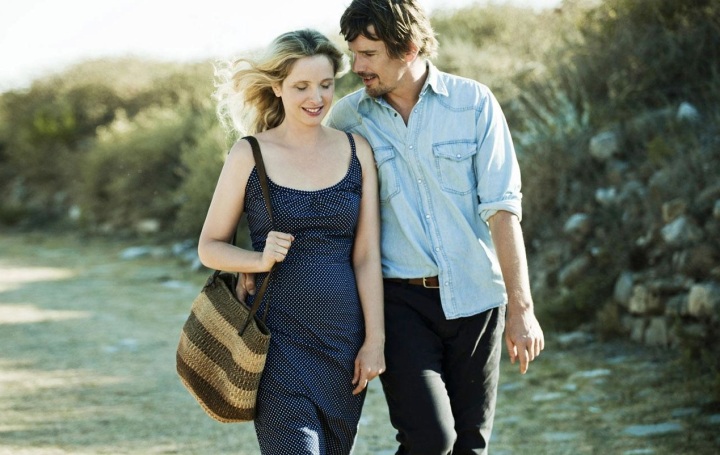 It’s been nine years since we last checked in one of modern cinema’s most intoxicating love stories. This third installment initially paints a picture of domestic bliss for cerebral soul mates Jesse and Celine. Hank, the former’s teenage son from a previous marriage, has just spent what he calls the “best summer of my life” with his father’s family (including his twin girls, conceived in the wake of Before Sunset’s romantic trysts) on the Greek Peloponnese peninsula, and the film begins with a quietly panicked Jesse seeing him off at the airport. It’s a winning opening, with Hawke’s affectingly strained performance suggesting that priorities have changed since Jesse first boarded that train to Vienna almost twenty years ago.

Personalities run the risk of being diluted when children are thrown into the mix, but in a ballsy move, Before Midnight positions its characters as people, not parents. Lazy scriptwriting and mortifying perceptions of gender norms mean female characters are most likely to fall prey to the insipid trappings of domesticity. Thankfully, Celine is as unmovable as ever. Her inclination for tart honesty and playful emasculation has only strengthened over the years, and it’s the latter trait that allows tension to mount over otherwise jovial group dinners.

The sardonic yet sensitive Jesse has always been the more likeable of the pair, and the disconnection he feels between himself and his son is clearly delivered and affecting. The ensuing years have also seen him gain more notoriety as a writer, while Celine’s corresponding career cul-de-sac adds a slightly bitter slant to her insistence that there’s more to his parental longing than he’s letting on.

Their relationship works best in motion. Car journeys and leisurely walks through quaint towns serve them well. These are essentially two intelligent and fiercely independent people who happen to find each other fascinating. Their natural yet intellectually-charged exchanges remain the series’ USP, frequently exploring even the most minute aspects of a relationship with candour and a humbling sense of introspection. Subjecting these conversations to the probing Greek sun proves to be an inspired move, while the beautiful, open backdrop of dry greenery and a cerulean ocean proposes a kind of emotional openness to boot.

It’s when they pair are left to their own devices in a static setting that trouble brews. Both characters emerge flawed and stunningly three-dimensional by end of the film’s major setpiece, an electrifying hotel room showdown in which loyalties are tested and lines are drawn, again and again.

It would seem has age has failed to douse the lovable, boyish spirit Hawke has been bringing to his role since 1995’s Before Sunrise, although Jesse himself is a less patient man than before. When he declares his partner to be “the mayor of Crazy Town”, it should at worst be an amusingly inappropriate outburst, but Deply ingeniously drops Celine’s armour in just one stifled expression, repackaging it as an unnecessarily acidic attack on her character.

Notions of performance and role play are integral to the film’s emotional trajectory, while Jesse’s celebrated fictional account of his and Celine’s courtship adds a neat meta angle. Hawke and Deply deserve credit not only for their red-hot chemistry and brave performances, but also for their contributions to the script, which they once again co-wrote with director Richard Linklater. The trio’s dedication to the story at hand is undeniable and, in a cinematic landscape so chronically deprived of brilliant trilogies, pretty inspirational.