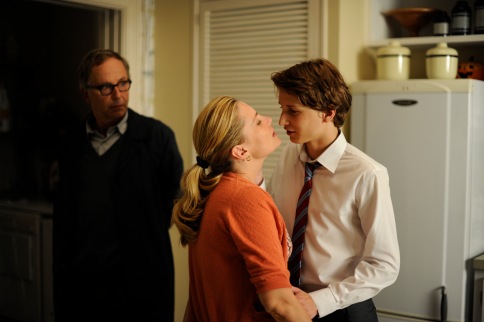 Review: The first half of François Ozon’s latest is an absolute dream, as enigmatic teenager Claude (Umhauer) brings wholesome suburbanites Esther and Rapha Artole (Seigner and Ménochet) to the attention of snarky, childless teacher Germain (Luchini) and his wife Jeanne (Scott Thomas) via his designated writing assignments. The dialogue fizzes and the pace is relentless and confident, while a subplot involving the intricacies of Jeanne’s art gallery works in tandem alongside the teacher’s aggressive critiquing to pose the rather stupefying question of what actually constitutes as credible art, in whatever form. Sadly, such neat self-awareness is simultaneously lost on Ozon, as the celebrated auteur takes his characters into unnecessarily strange territory.

Each installment of Claude’s tale exhibits a predatory nature. Upon befriending the Artole’s innocuous son Rapha Jnr. (Ughetto), he is eventually granted access to their home, where a dangerous infatuation with the delicate Esther begins to blossom. The family carries an air of generic perfection, and Claude’s determination to expose a seedy underbelly is clear. It would all be very American Beauty-lite were it not for Germain and Jeanne’s enjoyably bitter exchanges. Luchini and Scott Thomas share a natural chemistry, making Ozon’s cheap last-ditch attempt at provocation at the expense of their relationship particularly frustrating. Nonetheless, Umhauer manages to impress in a turn reminiscent of Ezra Miller’s in We Need to Talk About Kevin, while the myriad of pleasures found in the film’s first half are likely to linger.